The Protection of Civil Rights Act, 1955 is an important piece of Welfare legislation fixing punishment for practicing and encouraging untouchability. Under Article 17 of the Constitution of India, untouchability is prohibited and the enforcement of any disability arising out of untouchability is an offence and punishable in accordance with the law.

According to section 3 of PCR Act, 1955, whoever on the ground of untouchability prevents any person from entering any public place/public hotel or place of worship, prevents use of water from any water source etc., shall be punishable with imprisonment up to a maximum of 6 months and fine of not more than Rs.500/-.

Under Protection of Civil Rights Act, Rules 1977, the State Government may appoint an officer not below the rank of a Sub-Divisional Magistrate for the purpose of making an enquiry in respect of Section 10 (a) (1) of the Act to impose collective fine against the offences.

The Special Mobile Courts were constituted for dealing with offences under PCR Act, 1955 in the State from 1978. (13) Special Mobile Courts are functioning in the State. Assistant Public Prosecutors were separately appointed by the Director of Prosecutions to conduct the prosecution of the cases before these Courts. Required funds are provided through Centrally Assistance to State Development Plan.

There are (13) Special Sessions Courts headed by Judges and assisted by Public Prosecutors functioning in the State to deal with the cases of atrocities against SCs/STs under Prevention of Atrocities Act, 1989 in all the districts of Andhra Pradesh.

A Special Cell in the Police Department in the office of the CID headed by an IGP / DIG and with supporting staff and field staff is functioning for speedy investigation, prosecution and for effective disposal of cases of untouchability offences and cases of atrocities on SCs & STs. The entire expenditure of the PCR cell in the CID is borne by the Social Welfare Department.

During 2017-18, Rs.3032.15 Lakhs under Central Assistance to State Development Schemes is provided under Special Criminal Courts Scheme for the above purpose.

The Government provides relief and rehabilitation measures to the victims of the following category of cases also.

Government have been encouraging Inter-Caste Marriages for social integration and social reform with an objective of eradication of caste system in the society. Under this scheme Rs.50,000 is given as incentive for inter-caste married couples if either spouse belongs to Scheduled caste.

The ASWO/DSWO has to verify the sanction proposal within 15 days from the date of receipt of the application. The Dy. Director (SW) of the district to which the SC spouse of the inter-caste married couple belongs, will sanction the incentive and issue a certificate of inter caste marriage.

The incidence of the system of Jogins / Basavis is nothing but cruel exploitation of girls and women coming from the disadvantaged groups. There is a special legislation called the A.P. Devadasis (Prohibition and Dedication) Act, 1988 passed for abolishing the Jogin system. The basic objective of rehabilitation is to secure economic independence for the Jogin women, so that they would not be socially exploited and simultaneously to bring about social change.

During the year 2010, the Govt. have appointed Sri. V. Raghunath Rao, Retired Dist & Sessions Judge as Head of the One Man Commission to understand the problems being faced by the Children of Joginies, Mathangi, Devadasis & Basavis and to make recommendations to the Govt. for betterment of their living conditions. The Commission has submitted the report to Govt. The identified Jogins are rehabilitated through APSCCFC Ltd Economic support Schemes. Government vide G.O.Ms.No.100 SW(CV-PCR) Dept, Dated: 09.12.2015 issued the A.P Devadasis (Prohibition of Deva caste) Rules, 2015.

The District Collectors and Revenue Officials are entrusted with identification, release and rehabilitation of Bonded Labourers. The District Collector, Revenue Divisional Officer and Tahsildars of Mandals have also been empowered to sanction and disburse monetary relief to the freed bonded labourers. Out of relief amount of Rs.20,000/- an amount of Rs.1,000/- would be paid immediately on release of Bonded Labourer as subsistence allowance. The APSC Co-operative Finance Corporation is rehabilitating the Bonded Labourers once identified and relieved of the bondage, through Economic support schemes.

In pursuance of the instructions of the Hon’ble Supreme Court and that of National Human Rights Commission (N.H.R.C)., District Collectors were asked to conduct fresh survey of bonded labour and re-survey of all rehabilitated bonded labourers to ascertain whether they relapsed into bondage again or not. The NGOs are also involved in the identification, release and rehabilitation of bonded labourers.

Distribution of house sites to the weaker sections is one of the flagship programs of the Govt.

The Revenue Department acquires the private, ceiling, endowments, assigned and Govt. lands, and distribute House sites to SC, ST, BC, Minorities and other economically poor people at free of cost for construction of Houses. The Social Welfare Department provides the budget for acquisition of private and endowments lands to Revenue Department in the Districts.

In case of any problem in purchase of land in a particular village, proposals may be initiated for passing consent awards adopting instructions issued in G.O.Ms.No.139, SW(LA.1) Dt.28.01.1998, where a negotiations committee can fix the value of the land at 100% over and above the rate proposed by the LAO.

Govt. in G.O.Ms.No.1391, Revenue (LA) Department dated 30-10-2007 have issued orders enhancing the ceiling limit to 200% empowering the dist. level Negotiation Committee for amicable settlement of land acquisition cases relating to house sites in Urban areas and also for the lands acquired outside the urban limits for the use of urban beneficiaries Govt., in G.O.Rt.No.1042 SW (LA) Dept., dt:28.12.2011 have issued orders to all the District Collectors, in the State and to the Commissioner of Social Welfare, A.P., Hyderabad stating that the expenditures towards land leveling shall be met from the NREGA funds under the control of Rural Development department. All the District Collectors shall send all proposals for land leveling to the Rural Development Department, for approval and sanction of funds and with regard to leads less than10 Km distance the concerned District Collector is authorized to sanction and leads above 10 Kms. shall be sent to the Government for sanction. The Commissioner/Director of Social Welfare, A.P., Hyderabad and the Dist Collectors shall forward all proposals for land leveling to the Rural Development Department, and no expenditure relating to land leveling shall be booked under the LA budget, henceforth. Govt. have taken up a policy in the year 2006-07 to provide house sites to all eligible poor families on saturation basis under the programme called INDIRAMMA. During 2017-18, Rs.7,500.00 Lakhs is provided for the above purpose.

Social Welfare Department pays electricity arrears and monthly bills of SC Households consuming 0-50 units per month. The amount payable shall be based on the actual demand and consumer wise details furnished by the DISCOMs. The scheme would not be applicable to SC Households whose consumption is beyond 50 units per month. The DISCOMs have to provide the data of eligible consumers to the CGG, and the CGG enables an online interface in e-pass website that facilitate the generation of the reports and to send the bills to the treasury and making payment to the respective DISCOMs in online by the Joint Directors/Deputy Directors (SW) in the State.

The A.P. Social Welfare Fund came into existence during 1975. It is registered under the Registration of Societies Act on 19.12.1975. The main objective of the A.P. Social Welfare Fund to provide financial assistance (grant in aid) to encourage, help, foster, strengthen the registered voluntary organization which are engaged in Social Welfare Actives like running orphanages / Medical care / Rehabilitation and Vocational training to Mentally retarded children / TB and Leprosy patients and their children / Pre-school education and similar institutions.

AP Study Circle is included in the Tenth Schedule of AP-Reorganization Act, 2014 and it is devolved to the State of Telangana and will provide services to the State of Andhra Pradesh under a Memorandum of Understanding (MoU) until such time that a Study Circle for Andhra Pradesh is established. Further the branches at Visakhapatnam, Vijayawada, and Tirupati are devolved to the State of Andhra Pradesh and coaching for other than civil services (Bank Pos/Clerical/Group– I/II/III etc.,) is provided at the branches. For providing guidance to Civil Services examination to SC students a new scheme ‘NTR Vidyonnathi’ was introduced in 2015-16.

“NTR Vidyonnathi” scheme is formulated and operational from 2015-16 for providing professional guidance for Civil Services Examination for 350 SC students by sponsoring them to (5) reputed coaching institutions in the Country.The number of seats are increased from 350 to 700 in 2016-17.For the year 2017-18 an amount of Rs.1800.00 Lakhs is proposed to provide coaching for 700 students. 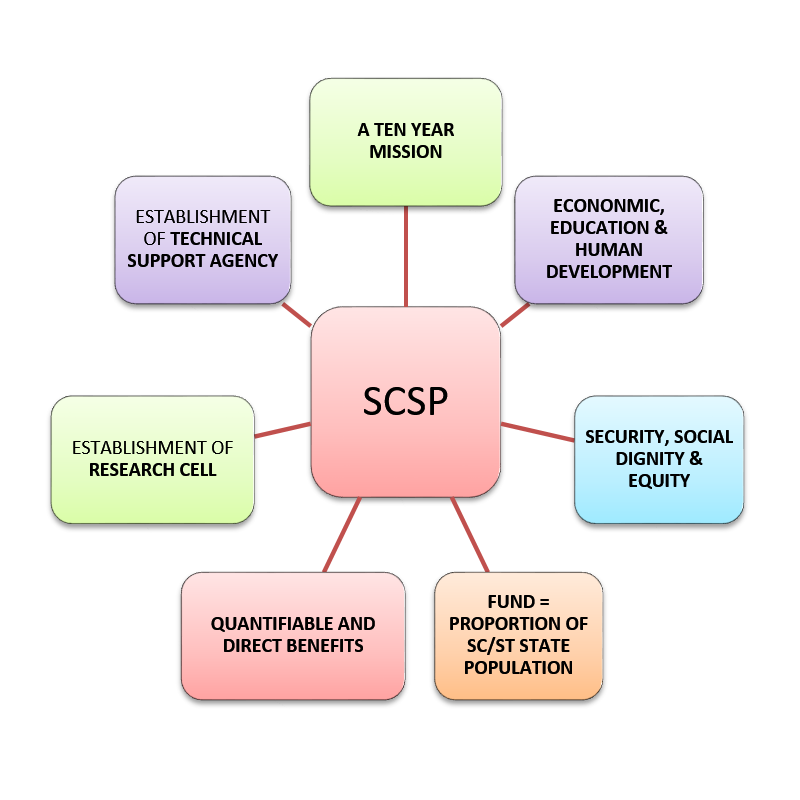 District Monitoring Committees for SCSP and TSP under the chairmanship of the District Collectors of respective districts (Sec 22 (1) of the Act 1/2013) are constituted in GO Ms No.34, Dated.01.11.2013 of Planning Dept.

During 2017-18, under SCSP an amount of Rs.9,28,413.41 Lakhs is allocated to 44 Departments to implement schemes which provide direct, quantifiable benefits to SCs and to their habitats and have potential to bridge the gaps in development.